As part of evensong on Sunday of 2nd Week, the choir will sing music by British composer Samuel Coleridge-Taylor to mark Black History Month.

Coleridge-Taylor was born in Holborn in 1875, and grew up in Croydon with his mother’s family. His father was Creole from Sierra Leone, and his mother was White English. He began learning the violin aged 5 and was playing in public from the age of 8. When Coleridge-Taylor was 15, he was admitted to the Royal College of Music with a scholarship, initially studying the violin then turning to composition. Novello began to publish his choral music even whilst he was a student. He achieved international acclaim with his settings of Longfellow’s The Song of Hiawatha and pursued a highly successful and prolific compositional career until his tragically early death from pneumonia a few weeks after his 37th birthday. Following his death, King George V granted Coleridge-Taylor’s widow, Jessie, an annual pension of £100, which is evidence of the high regard in which he was held. 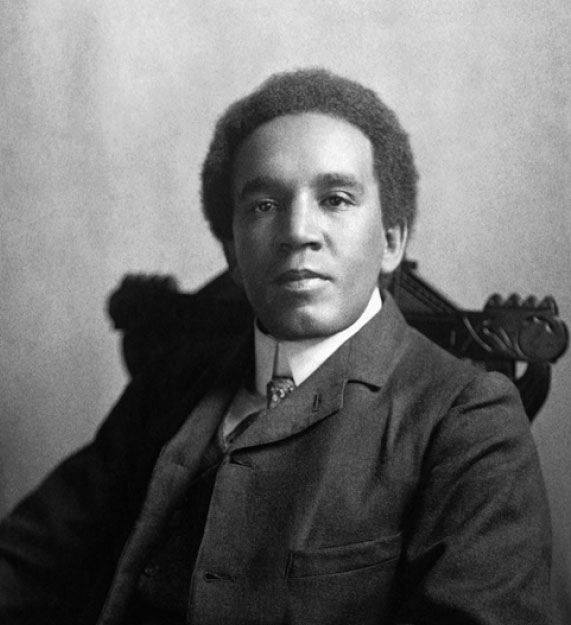 Although he never knew his father, Coleridge-Taylor was aware of his heritage and he drew on it in his compositional work. In 1897, he collaborated with the African American poet Paul Laurence Dunbar in Seven African Romances and the one-act opera, Dream Lovers. Later works include the African Suite, Op. 35 (1899) and the Concert Overture, Toussaint L’Ouverture, Op. 46 (1901), in which he fused elements of African musical idiom with the European style in which he had been trained. At his first visit to the USA in 1904, he was adopted as a symbol of hope against oppression by the African American community; and in an unprecedented private audience, President Roosevelt expressed his wish for “more liberal attitudes to people of colour”.

The choir will sing Coleridge-Taylor’s Magnificat and Nunc dimittis in F major and anthem, ‘Lift up your heads’. The Magnificat and Nunc dimittis was published in 1899, around the time of his first success with The Song of Hiawatha. ‘Lift up your heads’ was one of the compositions published by Novello during his student days. Both show Coleridge-Taylor’s proficiency in the style of choral composition promoted by his teacher, Stanford.

Evensong will be held at 6pm on Sunday of 2nd Week (17th October) and all College members are welcome to attend.