We are deeply saddened by the death of Emeritus and Honorary Fellow and Former Regius Professor of History Sir John Elliott, who passed away on 9 March 2022 at the age of 91.

The shock of Sir John Elliott’s death will cause immense sadness not only to all those who knew him in College. It will be acutely felt across the globe by all those who came to know him through his many books and articles, as well as through his great generosity in speaking to audiences of professionals and non-professionals alike. 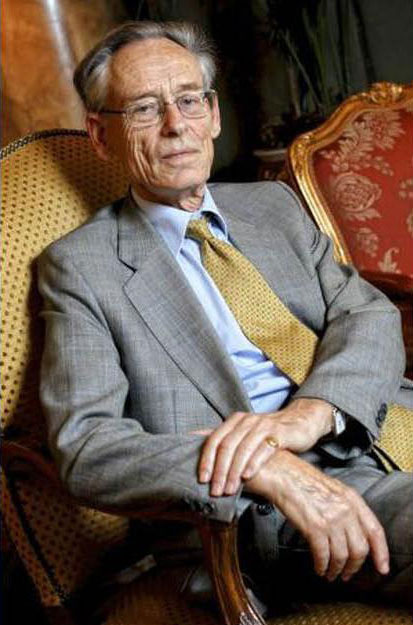 For Spanish and Hispanic history in the early modern period, he simply had no peer.

Sir John was born in Reading (UK) on 23 June 1930. From a relatively modest background, he won a scholarship to nearby Eton College before going on to the University of Cambridge. Originally interested in modern languages before opting for history, his intellectual life was nonetheless transformed by a six-week summer holiday in Spain during the Long Vacation of 1950. With the country still visibly suffering from the effects of a tragic civil war, he was moved by the dignity and generosity of a people who themselves had little. The turning point took place in the Prado Museum. There he liked to say he discovered the great Golden-Age painter, Diego Velázquez, and was mesmerised by his portrait of Spain’s chief minister, the Count-Duke of Olivares. Choosing to study Spanish history when the western world still turned its back on General Franco was a controversial decision, but he made up his mind to study a time and a place which was facing up to imperial decline in much the same way as, back home, post-war Britain was confronting similar challenges.

He earned his doctorate in 1955 for a study of the Catalan Revolt of the mid-17th century. (His initial hopes of studying Olivares had been dashed when he discovered that much of his personal archive had been destroyed during a bombing raid in the civil war, though in the 1980s his great study of the count-duke’s life appeared, with the subtitle of ‘The Statesman in the Age of Decline’.) For several years he taught at Cambridge and in 1968 he moved to a professorship at King’s College, London, where he continued to play a formative role in developing the notion that ‘the early modern period’ – roughly speaking from the late 15th century to the middle of the 18th – was an epoch in its own right. In 1973 he left for the Institute of Advanced Studies in Princeton. He remained there for almost two decades before becoming the Regius Professor of History at Oxford in 1990, and thus began his long and happy relationship with Oriel College.

Sir John was asked once by one of his many adoring pupils how he wanted to be remembered. With his characteristic directness and unaffectedness, he just replied that he wanted to be seen as someone who tried to understand. That wish he fulfilled throughout his career. He passionately rejected the term ‘hispanist’ since he wanted Spain to be seen as a typical European country whose historical trajectory was little different from any other of its neighbours. The need to compare histories impelled him to move into the history of the New World, and he was one of the forerunners of what would now be considered Global History.

Sir John also kept up that initial interest in Spanish painting of the Golden Age. With his great friend, the art historian Jonathan Brown, as co-author, he published a unique book entitled A Palace For A King, which was the political and artistic biography of the ‘Buen Retiro’ palace in Madrid. He joined the Prado’s advisory council, being ceaseless in his efforts, to bring together all the paintings once contained in the palace’s ‘Hall of the Kingdoms’.

Even after his retirement from the Regius Chair in 1997, Sir John remained a prolific historian. His desire to understand coincided once more with his profound respect for Catalonia. As a young Cambridge graduate, he had been taken aback by the enthusiasm he aroused when he asked whether any Catalan-speaking family might take him in, in much the same way that he found a welcoming spirit (and subsequently great friend) in Jaume Vicens Vives, the distinguished Barcelona professor who too was trying to ‘modernise’ the writing of Spanish history. In 2018 Sir John published his Scots and Catalans: Union and Disunion. He lambasted the ‘false’ histories of nationalists, reserving particular scorn for the government in Madrid which failed to to understand the aspirations of Catalonia yet lacked the imagination to see how this could be recognised within a single Spanish state.

Sir John believed in the capacity of individuals to shape history just as much as great historical forces. That is why he thought it so important that historians should write well. His power as a writer is evident from the oft-quoted Prologue to his Imperial Spain (first ed., London, 1963).

“A dry, barren, impoverished land: 10 per cent of its soil bare rock; 35 per cent poor and unproductive; 45 per cent moderately fertile; 10 per cent rich. A peninsula separated from the continent of Europe by the mountain barrier of the Pyrenees – isolated and remote. A country divided within itself, broken by a high central tableland that stretches from the Pyrenees to the southern coast. No natural centre, no easy routes. Fragmented, disparate, a complex of different races, languages, and civilisations – this was, and is, Spain.”

Despite his enormous workload, Sir John made time to keep up an international circle of friends, at the heart of which were his former doctoral pupils, including such distinguished historians of Spain as Geoffrey Parker and Richard Kagan. With his wife, Oonah, Lady Elliott, their house and gardens at Iffley next to the church became a centre of pilgrimage for anyone interested in Spain or the Americas. He was particularly pleased when doctoral students approached him, never quite comprehending why they might at first be reluctant to approach such a towering figure. Sir John was particularly happy in Oriel, and was always pleased to be introduced to any Spanish-speaking visitors who found themselves invited into the Senior Common Room, where he greatly admired a portrait that hangs on its walls by the Spanish painter, Ignacio Zuloaga.

Sir John had been recuperating away from home in recent weeks, but was planning to return to Iffley to continue his research into Portugal’s empire. A sudden and unexpected relapse brought him back to the John Radcliffe hospital in Oxford, where his sister, Judith, and wife Oonah were by his side.

He was, and remains, irreplaceable.

SEE ALL NEWS
We use cookies on our website to give you the most relevant experience by remembering your preferences and repeat visits. By clicking “Accept All”, you consent to the use of ALL the cookies. However, you may visit "Cookie Settings" to provide a controlled consent.
Cookie SettingsAccept All
Manage consent