Professor Lyndal Roper became a Fellow of Oriel in 2011, when she was appointed as Regius Professor of History by the University. She is the first woman, and the first Australian, to hold this post, which was created by the University in 1724. Professor Roper became a Fellow of the Royal Academy in 2011, and in 2016 she won the Gerda Henkel Prize for lifetime achievement in History. 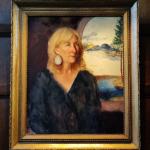 Professor Roper is also a Fellow of the Australian Academy of the Humanities and a Fellow of the Brandenburg Akademie der Wissenschaften. Her research focuses on German history of the sixteenth to eighteenth centuries, with a particular focus on gender and the Reformation, witchcraft and visual culture.

Professor Hindy Najman was appointed as the Oriel and Laing Professor of the Interpretation of Holy Scripture in 2015. She is the first woman to hold this important Chair in Theology since its foundation in 1883. Professor Najman has written on the Hebrew Bible, the Dead Sea Scrolls, Rabbinic Literature and Pseudepigrapha. She founded the Centre for the Study of the Bible at Oriel College in 2017 to promote the interdisciplinary study of the Bible across the Humanities and Social Sciences. The Centre aims to revitalise and enhance the study of the Bible in the University by providing a forum for risk-taking research projects that integrate scriptural traditions – Jewish, Christian and Islamic – into the many disciplines of the Humanities.

Oriel commissioned artist Nneka Uzoigwe to create these portraits to celebrate Professor Roper’s and Professor Najman’s many achievements, and to inspire future generations of students. The portraits are now hanging in the College’s Hall.

About the Artist: Nneka Uzoigwe

Born in 1990, Nneka Uzoigwe is a figurative artist. She trained at London Fine Art Studios and now paints from her studio in south-west London. She held her first solo show, ‘Waking Dream’ this year, and frequently exhibits at the Mall Galleries. In 2020 she was awarded the de Laszlo Foundation Award for excellence at the Royal Society of Portrait Painters Annual Exhibition.

“I wanted the paintings to feel like a normal portrait at first, till you look closer and discover hidden elements that allude personally to the sitters”

Magic, dreams and the imagination underpin Nneka’s work. In summer 2021, Nneka became an Artist in Residence at the Watts Gallery creating mythological paintings in response to exhibiting artist Henry Scott Tuke. Her final paintings, along with the paintings, ‘Alix and Her Hair Crowns’ and ‘The Marine Room’, were displayed alongside the symbolist painter George Frederick Watts. This was also an honourable first for a contemporary artist, to have their works hung with within the Watts Historic Galleries.

Nneka works to create dreamlike compositions within her portraits and combines her imagination with that of her sitter, to create a painting that says more about them.

Of the portraits, Nneka says:

“I wanted the paintings to feel like a normal portrait at first, till you look closer and discover hidden elements that allude personally to the sitters. I paint from life and often start with a clear idea of the direction of the portrait, which includes the expectation that it will develop and become richer with getting to know the sitters more personally. For example, the inclusion of the Santiago Calatrava bridge and initials in Hindy’s painting and the Albrecht Durer landscape and eggs in Lyndal’s, will easily make sense to those who know them well or intrigue those who want to know more.”