On Wednesday 2nd February Baroness Hunt gave the inaugural address, entitled ‘Accommodation or Transformation? LGBT Inclusion in the Christian Faith’, in the David N. Lyon Speaker Series: ‘The Politics of Sex and Gender in Diverse Societies’, which runs throughout Hilary and Trinity terms 2022. 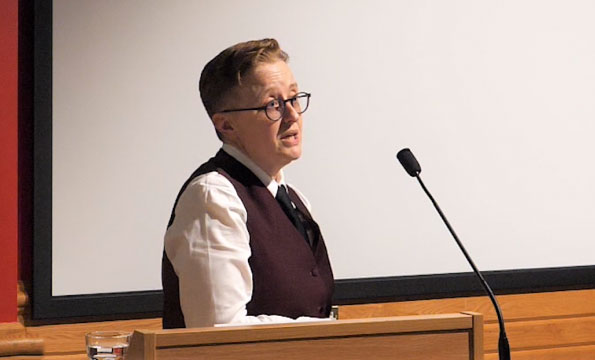 During her talk, Ruth shared details from her own life, speaking about the many difficulties she personally faced growing up in Wales in the shadow of Section 28, in force from 1988 to 2000 in Scotland and until 2003 in England and Wales, to her time as an undergraduate at St Hilda’s College, Oxford. She also reflected on her time as Chief Executive of Stonewall, speaking about what she was focused on achieving (acceptance and accommodation) and what she could have done differently to work towards more radical transformation.

Ruth also spoke about the importance of her Christian faith, which may seem to some to be incompatible with her sexuality. She talked about how, in her view, the Church is moving towards the acceptance and accommodation of LGBT people but has perhaps yet to achieve a transformation – although increased membership and acceptance of LGBT people in the Church was a transformational act in itself. Summing up a deeply personal talk punctuated by wit and levity, she expressed her view that acceptance is an important first step on a long path to true transformation.

Baroness Hunt is one of two directors of Deeds and Words, along with her partner Caroline Ellis, working with individuals, organisations, businesses, social movements and communities to help create a shared sense of purpose. Ruth is also a member of the Steering Group for Change in the House of Lords, a trustee of Engage Britain, and a member of the PCC at St Matthew’s Church in Bethnal Green. Ruth was introduced into the House of Lords in October 2019. Prior to joining Deeds and Words, Ruth was the Chief Executive of Stonewall; the UK’s largest charity campaigning for equality for lesbian, gay, bisexual and transgender people. In her fourteen years with the organisation, she worked with more than 700 organisations in the UK and globally, as well as with schools, grassroots campaigners, and senior government Ministers, and led high profile, impactful campaigns.

We are grateful to Baroness Hunt for kicking off the David N. Lyon Speaker Series with this deeply insightful and personal talk.

Oriel College is proud to present the David N. Lyon Speaker Series: ‘The Politics of Sex and Gender in Diverse Societies’, the first of its kind in the University of Oxford, examining tension arising from conflicting cultural traditions in society. To book future events in this series, visit https://www.oriel.ox.ac.uk/about-college/news-events/news/speakers-annou…